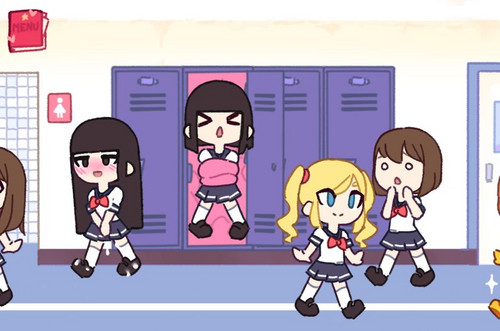 With double the girls and a few new secrets I hope you will enjoy :)

Your support keeps us going and keeps the updates coming 💘

Grab girls and pull them in to a locker filled with tentacles! Fun!

For the game to work you have to be patient.

What did you get? Did it also say that its not responding?

Try to grab the girls already caught. If you notice, there will be some difference in their design, naturally.

Hi. I had some suggestions.

Firstly, I created this account just to post this. So, great job and keep up the good work!

The girls that are not caught will run away when you open the lockers far away from them and fail to catch them. How about adding a similar mechanism to the girls that are caught so that they won't ignore the lockers opened next to them. They could willingly more or less rush toward the lockers to get caught, drooling or something, although it's up to the designer to make the animation believalbe enough. They're too dreamy to believably "rush" to get caught after all. Maybe make them stay near the locker expecting to get caught? It will also mean to add a mechanism to grab these specific girls after a "failed" attempt to open the lockers.

Also, there could be other animations or different types of positions, in case you could add other places or facilities to the game, although that may no longer be a "tentacle locker" game. MaYbe a new game? You could create a map of the school.

Or maybe you could, even better, add the ability to upgrade lockers to use those specific tentacles, animations or positions. Heck, you could even add a different dimension to some of the lockers to pull the girls, swallowing them into a meatwall environment so that in this wider pocket dimension other things will be possible. Vore goes hand in hand with tentacles (and it's already vore). It will still be within the "tentacle locker" realm and yet adds newer dimensions and tools to the game. If an upgrading system is added, maybe you could also add a system tochange the color of the tentacles. The coloring is great as is. It's just a thought.

You could also add grabbing multiple girls at the same time (may be two) who could end up in a tighter place, naturally, grabbing each other's hands or kissing each other, especailly if both of them were previously caught. That'll be a new acheviement. (It can be added via the upgrade system.)

The upgrading will make the game maybe more complicated and it may not work if simplicity is your goal.

Also, for some reason I can't seem to see the girls that have been caught once they leave the lockers almost immidiately, despite after realease they should be slower than the rest. Do they disappear? Is that intentional? Thanks.

mysterious golden girl that is illusive and rare and secretive that i cant seem to find out how to get it to activate or, uhhh, summon....hints?

5+ grabs on each girl type until they have a reddened face in their book photo, then the gold girl will start showing up.

Thanks for the info

i've tried both the 32 and 64 bit versions and it just leads to a black screen after the unity logo. is there something i should be doing?

maybe there is some other setting on your computer but I am not sure. sorry!

that's okay. thank you for helping!

U gotta be patient

The addition of bathrooms gives me an idea for bathroom stall scene. Maybe keep the animation the same but have the background with tentacles coming out of the bowl and back ? Eh?

The game isn't playing for me. It shows the "made with unity" logo but after that the screen is black. Did I miss something when I downloaded it or does it take a long time to load? Thank you for responding.

If you are on a 64 bit computer try the 64 bit build because that has solved this problem for some people.

Thank you. It works now. I enjoyed it a lot and can't wait for what new things you have in store for this game.